← Dealing With Fools Is There (Another) Doctor in the House? →

Having finally left Midway and its warring Traveler families, I made my way up north to the… town? of Clinton FARM, passing a lovely little PvP town on the way, which yielded some nice stacks of resources. Having found some fluff in Midway, I was looking forward to the next town but I must admit that simply because of the name of the place, I merely expected some references to the Clinton family, or perhaps some farm jokes (don’t tell me you wouldn’t want to accept a mission line from Old McDonald). So when I strolled into town I was initially disappointed: no Bills, Hillaries, Monicas or Quack Quacks in sight.

But when I started to take on missions, I did notice something; an NPC’s name. See, one of the mission givers in Clinton FARM is called Dr. Hugh Clinton. Now that in and of itself does not necessarily mean much, but it does bear some resemblance to a certain person who is somewhat related to medicine. Know who I’m talking about? If not, bear with me. I’d given up the thought of writing a post on the topic until, a few missions later in the line, I was sent downstairs to meet the next mission giver, a bespectacled lady named Dr. Laurie Clinton. If you watch a certain medical drama series, you might recognize the name(s) now. Actually, just being an old Black Adder fan would cut it.

So without further ado, allow me to present you with the British actor with the most convincing American accent, best known (in recent years, at least) for his portrayal of the misanthropic Sherlock Holmes-esque medical wonderboy, Dr. Greg House: Hugh Laurie! 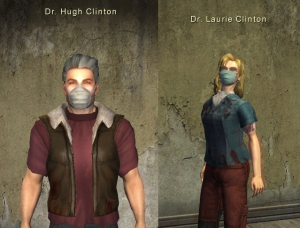 Funny, I could've sworn he was older. And just one person.

← Dealing With Fools Is There (Another) Doctor in the House? →