Sometimes, when you’re looking at stuff while in a certain mindset, your brain automatically starts linking stuff to it. I’m assuming the same will happen to me at those times when I actively search for fluff, resulting in claims at references that are a bit more… far-fetched, or vague, I guess. This is just such a case, as even if it is a reference, it is such a commonly used one that it can hardly be considered. But, since I did see it, what the hell.

I was still doing odd jobs for the good citizens of Midway—specifically for the Burns family—working towards that nice AP reward at the end of the mission line. In one of these, the young Mr. Burns (and yes, the Burns family might be a nod towards the wealthy yellow-skinned curmudgeon of Springfield fame, but since Burns is not that uncommon a name, and I saw nothing else to support this idea, I’ll pass on that one… for now) tasked me with getting a small supply of crossbow bolts up to his woman on the rooftops. The mission name?

This put me in mind of two things: The first one, as some might guess by the title, is the hit song by The Alan Parsons Project (quick! 5 chips if you can guess who was a core member of that band!) 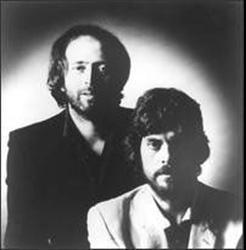 From right to left: Alan Parsons and, by inference, "The Project"

The song itself, by the way, was likely a tribute to something else. Eric Woolfson (come on, you didn’t really think he was named “The Project”) was said to have been fascinated by the security cameras in casinos, also known as “Eyes in the Sky,” and did the song about them. Listening to the song, I can sort of see how this could be true.

The second thing I was reminded of is an old SciFi novel by Philip K. Dick (hey, I was an 80s kid – anything from before that is “old” in my book), in which the eponymous Eye in the Sky was a perception of God (at least according to Wikipedia. I haven’t read the book; I’ve only seen it as a result when googling Philip K. Dick one day). It may be interesting to note that this book might also have been an inspiration for the aforementioned song, as quite of few songs and albums by The Alan Parsons Project were named after and inspired by works of literature: Their debut album was titled Tales of Mystery and Imagination, and was comprised of retellings of works by Edgar Allan Poe. Their second album was titled I Robot and was supposed to be about Asimov’s works, but ended up being just about robots since the rights to that property had already been sold. You can see where I’m going with this.

The reason for that wordy lead-in to the post is that the term “eye in the sky” is so common these days, that it can’t really be called a “nod” towards anything. For one thing, I’m not entirely sure how many people are still aware of the song/album and the book; obviously many people know them, but far fewer than, oh, 10 years ago, and I’m sure many people use the term without knowing of its previous famous incarnations. And for another, I’m not even sure that the uses I mentioned are the original ones.

Anyway, that’s the end of this post, and it looks like it’s also the end of Midway, as I have not stumbled onto more little things. If you’ve found some yourself, feel free to let me know. I’ll have a submission form up soon, but until then, feel free to use the comments for that.