Still wandering through the streets (and the occasional rooftop) of Midway, I came across this delightful medical practitioner: 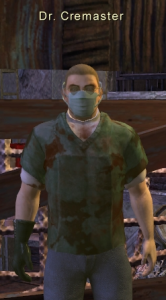 Dr. Cremaster was happy to teach me the basics of medicine (though truth be told, the good folks over at South Burb had already educated me upon the subject), and all he wanted was a couple of spleens and pancreas (and one medula oblongada) in return for getting me started on the path to being a real doctor. It’s when I provided these to him that things started to get more… familiar. See, after we concluded our business concerning the bits of Blade Dancers, the good doctor had the following mission for me:

Now I don’t live in the US, but I did spend some years there – specifically, the end of the 80s. And let me tell you, Nancy Reagan would not be pleased with Cremaster’s choice of words. For those of you not familiar with it, “Just Say No!” was the name of the decade-spanning anti-drug campaign spearheaded by then-First Lady Nancy Reagan in the 80s and early 90s (possibly after that, too, but by then I was half a world away). The campaign eventually branched out to battle violence and premarital sex in addition to drugs and its effectiveness is a matter of some debate but I, for one, failed to get past my initial bafflement by the campaign managers’ choice of a color scheme. 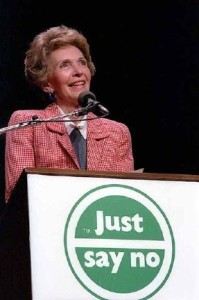 Because really, teenagers these days aren't quite confused enough